still loving all those flowers!

if you're visiting from shannon's site, thanks for stopping by! I'm glad to have you, and i hope you can stay and visit for a little while. don't forget to vote to save my butler's pantry before you go. (scroll down a wee bit to read the post that tells the history) thanks!

in the midst of all the other projects we have going on around our house, I've been working on my flower gardens, rock paths and rock walls. we moved in with virtually no flowers, and I've been systematically solving that problem all summer. i had a nice assortment of flowers to bring along with me when we moved, i traded some with friends and new neighbors, and i bought a few at the master gardener's sale this spring. we moved in on a Thursday, and Sunday afternoon i was already outside working on making some flower beds. really. that's how much i like flowers!

the whole flower gardening thing has been going so well that i already have some perennials that need divided. and with a pretty tight budget, and lots of flower gardens that I'd like to do, that's definitely a good thing! today i was able to get out and work in the dirt, and i divided and moved mums, asters, lamb's ear, black eyed susan, blazing star, bleeding heart, lung wort, some sort of dusty miller thingy, and coreopsis to the kitchen garden.

now, here's my WFMW tip: a few weeks ago i walked around and looked at my gardens. how were the plants doing? were they liking where i had put them in the spring, or did they need moved to a more suitable place? was there too much yellow all clumped together? then what i did was take a roll of Dave's surveyor's tape, and mark what i wanted to move, and what i wanted to divide. the plants that i merely wanted to move, i tied one ribbon on, but the plants that were ready to be divided, i tied on 2 ribbons. then i was able to observe for a few days, before i hastily dug out my flowers, without having a clear idea where i was going with them. even though i go for the eclectic, Tasha Tudor cottage garden look, it's good to have some sort of plan of how i'd like my gardens to look. also, it goes without saying, that being patient and then dividing my own perennials saves lots of money at the greenhouse!

following are some pictures i took mostly just for fun, though the concept is pretty simple. maybe you can see in the first picture that the lung wort is definitly not happy! i moved it to another shady spot, with more moisture. i think that it will be happier come spring! 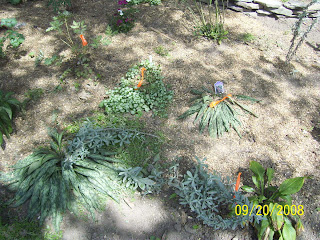 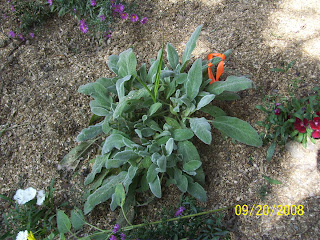 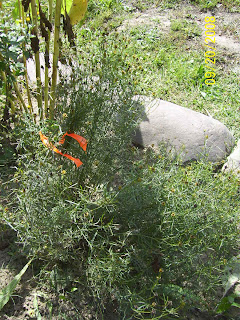 thanks for stopping by! happy gardening!

Great idea. Your plants look very nice. I kill everything in my yard - except weedsd. :)

You are lucky! I kill all my plants!