a {partial} snapshot of the bounty from our garden.... 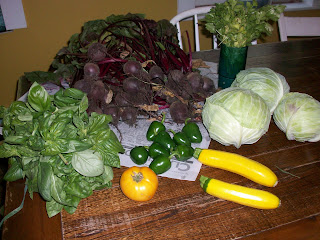 this picture is several weeks old, but this is one of the very first harvest of a variety of veggies: basil, beets, cherry bomb peppers, a yellow tomato, green cabbage, cilantro and yellow summer squash. 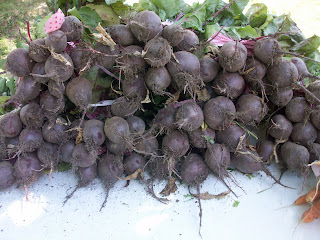 beets. who knew that they'd be so popular? aside from corn and tomatoes, they are our most requested vegetable. thankfully, i planted ALOT early in the season.
i will mention here, though, that beets do not like raised beds. they do their top beety thing quite nicely, but the main beety thing on the bottom? very disappointing. 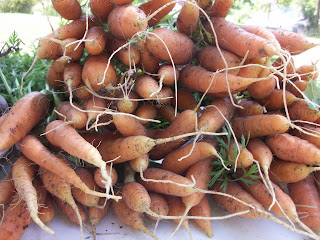 the carrots have also made a respectable showing, although they are not nearly so popular. I'll take carrots to the farmer's market only one or two more times, and then pull them all to free up the raised beds for some fall plantings of lettuce, strawberries, spinach and broccoli. 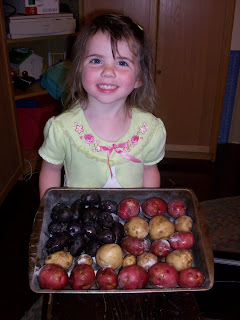 here is part of our July 4th feast: red, white and blue potatoes. 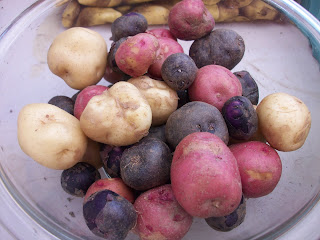 we're glad that we grew the blue potatoes this year, but the yields are very disappointing. this will be the first AND last year that blue potatoes are grown on our little farm by the bridge. even though we started them quite early, (by most standards) it's obvious that the blues needed another month or more in the ground to size up nicely.

the red, white and blue potatoes did sell marginally well at the Farmer's market, and in our CSA boxes, so i guess it wasn't a total waste... 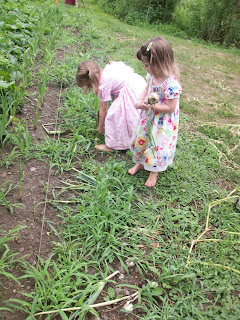 most of the onions are harvested, or on the list for this week. many sized up quite nicely, and i was not disappointed. after trimming the tops and roots, they are spread on newspapers in the mudroom to dry out. again, the red and white onions are a staple at farmer's market, and for our boxes. surprisingly, the white seems to be just as popular as the red onions, which is not what i expected. i like to cook with the red onions, just for the added color they give. 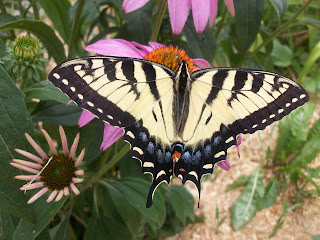 and just in case you think that we don't take the time to stop and smell the roses ( or purple cone flowers, as the case may be...) i took this picture last week, right outside the back door in the perennial flower garden. 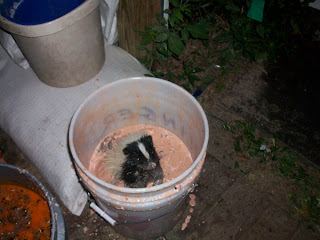 and this little surprise greeted G and me on our way to dunkin' donuts at 6AM last week. this curios and greedy little skunk got in *almost* over his head. he took a little dip and dive into the pig bucket and got stuck!

Dave dispatched him without incident.

although i will say, that it would have been MUCH better if Dave had removed the skunk AND bucket from OFF the BACK porch, as a DEAD skunk, EVEN though MOSTLY buried in a pig bucket, can STILL smell up a back porch.

Email ThisBlogThis!Share to TwitterShare to FacebookShare to Pinterest
Labels: for my readers, gardening, livestock and garden report: 2

July: Jesus in our heart and home 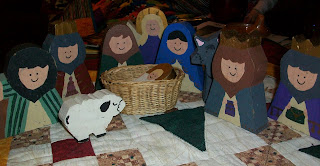 years ago, when the older children were small, i made this wooden nativity. i had seen one similar in a friends' house, and she was gracious enough to let me trace and copy the figurines.

this sturdy, chunky, child-friendly set is one of my favorites. it's the one that i reach for each Christmas as we re-tell the smallest children the wonderful story of Jesus.
at 9:22 AM 1 comment:

thursdays are almost my favorite day!

my routine for Thursday mornings has been to get up early and begin harvesting for our CSA boxes. i make the garden rounds and see what abundance we have to share with our families. much of the produce goes in the boxes, always making sure to have a good variety, and then some gets saved for farmer's market on Friday mornings. 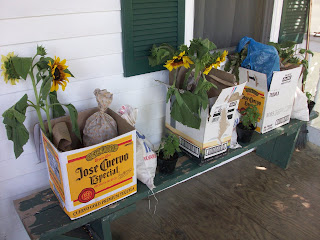 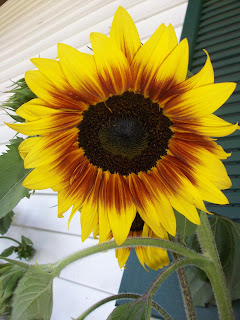 and the best part? all that fresh produce (no pesticides or herbicides) for $23!
and on another note: the jalapeno jelly seems to be a favorite with the family. if we continue at our current rate of consumption, I'll need to make well over 22 gallons of the spicy greenness!
mathematically speaking, that is!
at 11:07 AM 1 comment:

Email ThisBlogThis!Share to TwitterShare to FacebookShare to Pinterest
Labels: CSA, for my readers, gardening, livestock and garden report: 2

these two little girls are sure country girls all the way to the core, and make their daddy's heart proud! 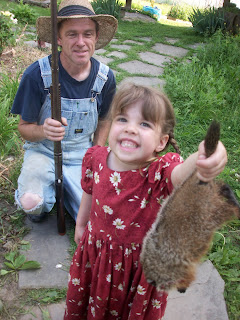 Dave has been quite determined to dispatch all the groundhogs that have been attempting to nibble at our garden.
i don't think either of us could have taken another disappointing year like last years, when our only claim to fame was being potato farmers. 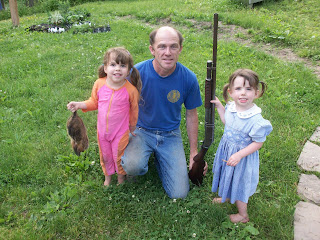 the girls are happy to help daddy with the groundhogs, giving encouragement and squeals when he gets another.
A even asked if we were going to eat one for dinner.
seems to me, i remember some rumblings about that before....
at 12:27 PM No comments:

Email ThisBlogThis!Share to TwitterShare to FacebookShare to Pinterest
Labels: for my readers, livestock and garden report: 2, the younger crowd

gasp! she lives... and writes!

so much has happened, i don't even know where to start!

our garden is definitely doing much better this year, and that leaves me with just about zero time to write.
I'll jot off a rambley list, and hopefully get back later to post some pictures. (even though I've not been blogging, i have been taking pictures. sort of.)
* we butchered 75 chickens last week, and although it nearly killed me, our freezers are full with the best chicken meat you've ever eaten.
* we just sent the last 2 winter pigs to the butcher. despite not having them sold when i dropped them off, at the last minute many buyers came out of the woodwork, prompting Dave to consider building another pig tractor. with the restaurant food that we give them, and the pasturing, the pigs are a much needed cash inflow in our little operation.
* the garden is producing, and is gearing up to producing relentlessly! potatoes, some tomatoes, zucchini, yellow summer squash, egg plant, onions, green beans, yellow beans, carrots, beets, rosemary, basil, cilantro, red cabbage, green cabbage, jalapeno peppers, banana peppers, cherry bomb hot peppers, Anaheim peppers, cucumbers, sweet green peppers...
* beets are a popular item; both for my CSA boxes and farmers' market
* red cabbage is not.
* this year's tally for garden pests that dave has "dispatched" is: 10 woodchucks, 2 skunks and 1 rabbit. (the skunk G found right out the back door last week, sitting placidly (and stuck) in the pig bucket.)
* i started a running tally of the things we're freezing and canning for the winter. although it's a bit late in getting posted, it's up-to-date as of right now.
* even though I'm not a morning person, i much prefer to get up at the crack-'o-dawn and do my garden work then. I'm often back in the house before 11am, and will go out again after dinner.
* we're very thankful for the water pump that i bought, as well as the creek nearby. we've been using the creek to irrigate the garden, without which we'd have no garden.
* i have 5 (!) families for my CSA. it's encouraging. and only a little stressful. we're learning so much this year, and hope to expand to even more families next year.
* I'm a produce vendor at the local farmer's market. last Friday was the first time, and it went well. things we learned from last week: people like beets, red potatoes, red peppers and small potatoes.
* quilting classes are still in full swing at the local Ben Franklin, and I'm able to squeeze in some time for quilting. i could almost call myself the quilting gardener.
or maybe the gardening quilter?
at 7:42 PM 1 comment: