August: Jesus in our heart and home 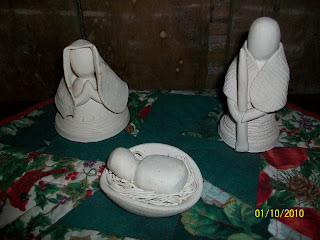 this simple clay nativity is one of my very favorites. it was made by a dear quilting friend, and i was fortunate enough to be the blessed recipient. (Jane even made me the little quilt to go with it!)

mary is a little worse for the wear, with a chipped veil and there is ketchup on the babe.


but that just goes to show that this is a treasured part of our holiday remembering.
at 7:24 AM No comments:

preserving the summer's goodness ~ one jar at a time! 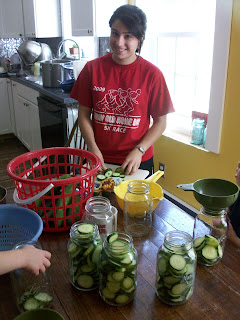 a few weeks ago i was blessed to have all 3 of my daughters help make pickles. 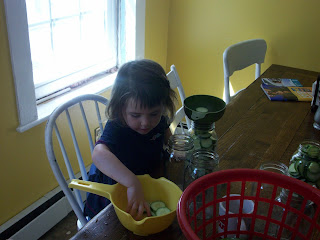 the little girls were happy to stuff the jars with the pickle slices that M and i cut for them. 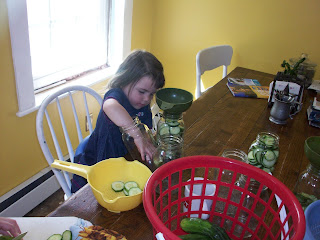 while the jars were not stuffed as tightly as i could have done myself, the girls are learning what it is to can and preserve our summer's bounty for the winter. 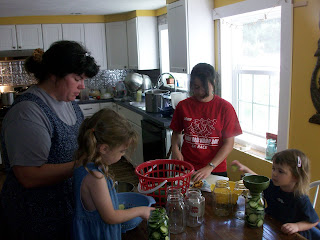 and that's certainly more important than having prizewinning pickles!

Email ThisBlogThis!Share to TwitterShare to FacebookShare to Pinterest
Labels: livestock and garden report: 2, puttin' stuff up, the younger crowd

you'd think with 7 CSA boxes weekly, 4 pigs and numerous canning/freezing days a week we'd be able to keep up better.

it's a wild and crazy ride, so hang on tight! (and don't forget to buckle your seatbelt!)

...just popping in for a moment to say "I'm still here! and hanging on for dear life!"
despite the total lack of rain for the third week straight, our garden is producing. i think that i can safely say that we've reached the point of relentlessness !
this morning alone, i picked a 5 gallon bucket of cucumbers. i thought that the cukes were pretty much petered out and done, but i guess after the thorough soaking that we gave them Saturday night and last night, they've made a miraculous comeback.
since today's agenda was already full with 3+ bushels of peaches, and 150 ears of corn, I'm not sure where we'll squeeze in the cucumbers. (and that's not counting the yellow beans that are ready to pick today!)
but squeeze we must, and squeeze we will. old man winter will be here far sooner than we think, if the speed with which this summer is galloping by is any indication.
wasn't it just last week that we were marveling that it was May first already?
we've been steadily harvesting, selling, canning, sharing and freezing our bounteous produce. what a satisfying feeling to see all the colorful jars lined up like soldiers on the cellar shelves!
I've updated the puttin' stuff up list on the sidebar.
I'll try to stop in again soon- i have some posts ready to go, including our latest chicken butchering escapade.
at 12:43 PM 1 comment: