quite possibly more than you ever wanted to know about potatoes...

usually it's a toss-up around here whether we'll call ourselves potato farmers or chicken ranchers...
today we'll wear the hat of potato farmers, and just call it even... 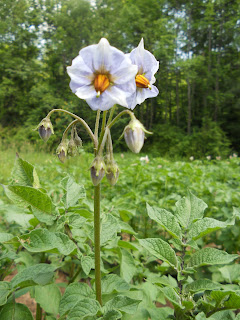 we're still on the bite-your-nails-will-they-be-ready-countdown of patriotic spuds for 4th of July. it's looking good down there in the lower garden, but you just never can tell...
these are the "blue" potatoes. if you take close notice, the stalks of the plants are blue, and the flowers have a definite blueish tinge to them. 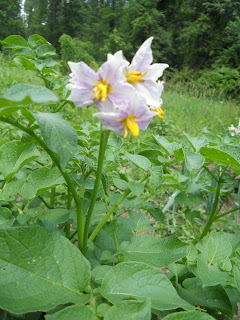 the superior (early white) potatoes are flowering as well. (the late season kennebecs are still not flowering!) the stalks of this variety are the normal shade of green, and while the flowers are a little bit purple, they more subtle in their coloring. 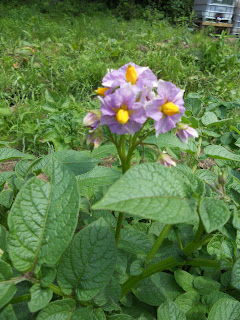 finally, these are the red Pontiac potatoes. still green stalks, but a more solid, albeit pale, purple coloring.

while i could maybe be considered a potato farmer (if you're feeling mighty generous and kind) I'm no potato expert.

however, it is interesting to see for the very first time a little bit of evidence of what is happening under the soil in the lower garden!
at 10:09 AM 1 comment:

June: Jesus in our heart and home 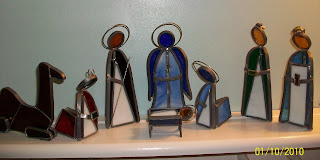 can i just say *for the 6th month in a row* that this handmade glass nativity is one of my favorites?

i acquired it through a determined bidding war on e-bay 7 or 8 years ago, and although it was not made for me, i treasure it just the same.

each piece was made by the same person, starting with the babe, Mary and Joseph. every several years, another component of the nativity was made, and then given, until the whole set was done.

i can't imagine what circumstances would precipitate giving up such a thoughtful gift, but I'm glad to have the chance to be the grateful owner of this very unique nativity.
at 7:21 AM No comments:

I've had uploading issues with the camera, so this is the post that i intended (and tried) to get up last week is just now co-operating! 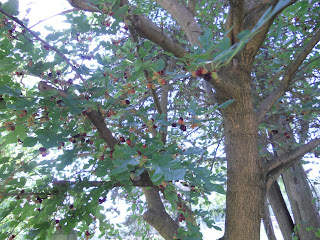 this mulberry tree is right outside our kitchen window, and we've been enjoying watching the birds all fight for their fair share of mulberries. we've had quite a few goldfinches, and for the first time this week we've seen Baltimore orioles!

this mulberry tree is actually quite old, and has been growing here for over 100 years. or maybe i should say, (more accurately) the grandfather stump that this tree is growing out of has been a staple in our home's landscape for quite a long time now! 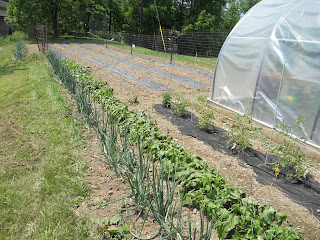 here is the upper garden- you can see the onions, beets and tomatoes. in the rows of black plastic are the cucumbers, zucchini, yellow summer squash, watermelon, cantaloupe, butternut and acorn squash. on the very right is ½ of the row of sunflowers.
there is also a row of beans thrown in, just for good measure! behind me, to the right, is the other half of the upper garden, containing popcorn, eggplant, some cabbages, yellow and green beans, sunflowers and gladioli.
on Tuesday i went to the greenhouse and bought a few flats of larger plants on clearance: cukes, watermelon, butternut and acorn squash. also green and purple cabbage. most of that stuff is in, and growing happily. 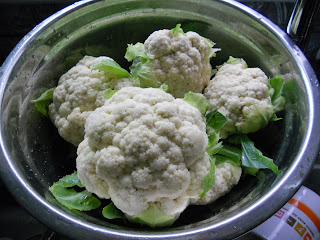 this is the first harvest of cauliflower. wow! we are so pleased with how the broccoli and cauliflower did that we're wishing we'd bought several more flats of each. i harvested more cauliflower tonight, with 2 dozen or more plants still maturing. the broccoli has had 2 harvests already, and tomorrow morning i plan on having M harvest, and pull, the rest of the plants. that will give us the needed room to plant the remaining green and purple cabbages. 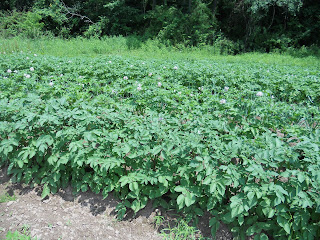 our potatoes are doing very well, and have been hilled several times. Dave made a special attachment for the roto tiller, so no more back breaking hoeing needs to be done. just one pass down the row, and it's done!

since the kennebec are still not flowering, we would not be able to have our red, white and blue potatoes for July 4th... 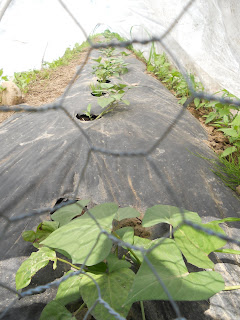 the sweet potatoes are also doing well, in spite of our disgust with Gurneys. one of these days, when i have a bit of free time, I'll call them and ask to be taken off their mailing list. that way i won't be tempted to buy something from them next year, no matter how cheap!

we still have the sweets under the row tunnel, and the plan is for them to remain that way. G made 2 end covers for me out of chicken wire, but even so, Dave often uncovers part of the row during the day so the sweets don't get too hot. B, my self-acclaimed "garden helper" will go down at dusk and help cover them up again. 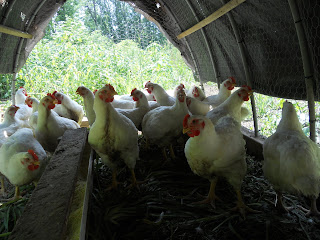 the first batch of meat birds are 9 weeks old, and cannot reach butchering weight soon enough for me! I've bought 18 bags of feed, and after purchasing 10 more at the feed mill today I'm more than ready for the cash flow to be reversed! 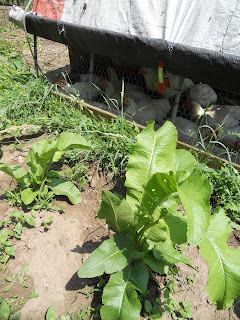 Dave's horseradish is doing fine, too, and we're looking forward to trying some fresh horseradish. we'll have to wait at least until September, though, since the old-timer told me horseradish can only be harvested in a month that has an "R" in it. 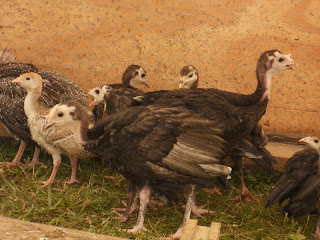 i may have forgotten to mention that we (I) decided to also raise 12 turkeys! 4 i hatched out in our incubator, and the other 8 i bought. it only cost me $50 for all 12, so even with that dismally disappointing hatch percentage (18 eggs) they were still far cheaper than if i had ordered day olds.
the turkeys are outside in the brooder hoop house, and moved daily just like the chickens. so far they don't eat much, but i expect that to change soon.
at least several are toms, and it's comical to watch these small birds strut around all puffy and proud despite their diminutive size. 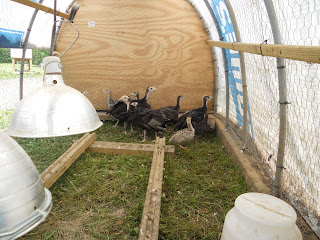 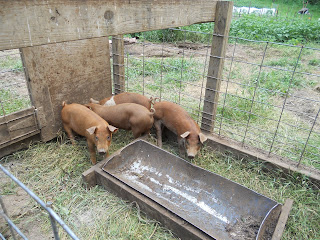 the first 2 pigs went to the butcher last week, with the remaining 2 to follow July 8. (anybody local need fresh, pastured pork?)
the girls and i went to farmer Allen's to get our next batch- 4 feeder pigs. 2 of these are ours, to be butchered in December and January, with the remaining 2 for sale. 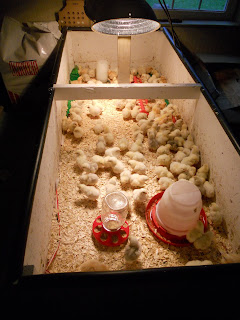 Wednesday our remaining 100 Cornish cross cockerels came, joining the 15 buffs i hatched out, and the additional 15 buff pullets we bought. with all these new birds, the poultry population here is nearing 250!
the baby buffs are our new laying flock, as the old buff orpingtons are 1½ years old, and showing it in their egg production. just today M gathered a small egg- about the size of a malted egg! that's ok for a pullet, but not acceptable for a mature hen... so as soon as these new hens start laying, it's off to the chopping block for the slackers!
that's about it for the happenings here "by the bridge". we're harvesting beets, carrots, peas and the occasional ripe tomato (when we can wrestle it away from A and B!) the eggplants and beans are blossoming, and there are tons more yellow blossoms on the tomatoes.
we're managing to *mostly* stay on top of the weeds. we primarily use the hand cultivator, but still use the roto tiller on occasion, and sometimes even resort to the old-fashioned method of hand weeding.
we're thankful for the consistent rain, and still have not installed our new irrigation system, but that should be done soon; hopefully next week.
thanks for stopping by; we appreciate your interest and your encouragement!
at 3:55 PM 1 comment: