Judy chose #2 for May- my "penguin stars". i missed working on this one during last year's UFO challenge, but maybe this year i'll get to it! 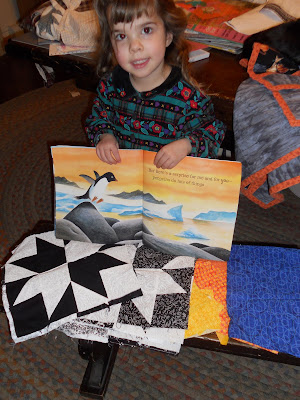 project #2: another block win (i showed these before). not sure on the plans for this quilt, but the book that A is holding (if you were a penguin) has inspired some colors/ideas that I'd like to try. the white/black/blue/yellow/orange color combo really intrigued me one day as i was reading this book to the little girls. 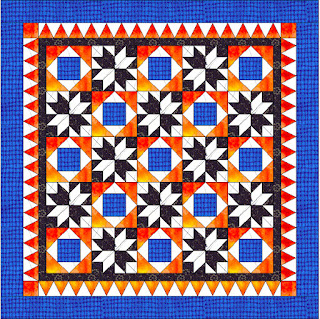 here's a quick layout that i did this morning on my EQ5 (no, i don't have the latest version number 7, but 5 seems to be working just fine for me!)

this is a pretty simple layout, but i'll probably stick with it. i had originally thought to do puss in the corners as the alternate block, but i like the way the square in a squares emphasize the stars and diaganol layout. plus- the S in a S are easier to do- always a plus!

still quilting- but with a broader audience in mind...

i never quite got around to working on #8 of Judy's UFO challenge. i did dig out my blocks, and also found/saved a few patterns that i might like to use as a springboard for my quilt design, but other that that: no progress to report on that design front.

however, i did think about some other quilty issues this month. namely, that i really have enough quilts. *gasp* did that really just come out of my mouth?

and how many quilts do we really need? really?

sometimes i feel as if I'm being a bit too selfish, or quilting only to please myself, and satisfy the desire to quilt the latest idea I've had, or use that beautiful fabric that I've just (unnecessarily?) purchased.

i have blogged before about our church's sewing circle, Scraps to Wraps. the girls and i have been dedicated in attendance, and I've been working harder at keeping tops pieced ahead of the tie-ers. sweet baby B is bigger now, and gladly helps with the quilting whenever she can. and A is big enough to use the featherweight (almost all by herself) and seems to enjoy piecing as much as i do. (scroll to the bottom to see the adventures of her first pieced blocks.)

and recently, i was contacted by a friend of a friend, and asked if i and/or our group would be willing to piece tops for GAiN ~ basically a tangible way to show people that they are loved and important, and to give an opening to share the gospel.

this has led me to think more deeply about my reasons for quilting, and creating. i can relate to what Eric Liddell said during the 1924 Olympics: "God made me for a purpose... when I run, i can feel his pleasure."

I'm certainly not intending to sound all pompous and righteous, because (especially if you know me in real life!) I'm not! i fail regularly, and shockingly so. but, for all my imperfections and shortcomings, i truly desire to please God.
and one way that i can do that is to quilt ~ because God gave me the creativity and desire to do so, and I'd like to think that He is pleased with me ~ especially ~ when i use my talents to serve Him.

so, while I'll continue to quilt and teach regularly, i want more of my focus to be on quilting for others, and not just for my own pleasure.
below are a few of the *simple* quilts that i pieced for Scraps to Wraps this month. 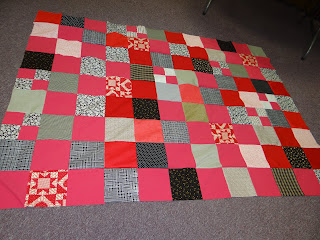 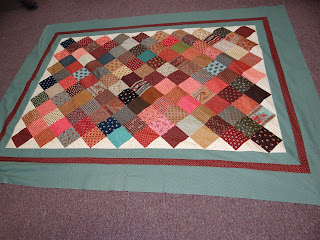 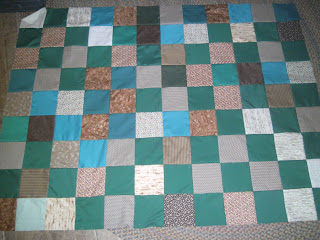 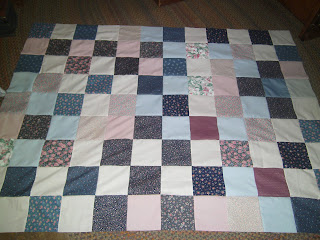 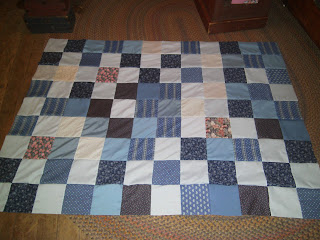 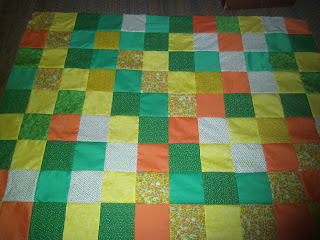 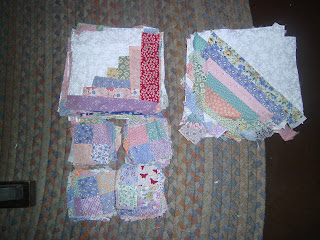 almost 5 years ago, before we moved to this house, i had packed up my sewing room (while hugely pregnant with baby BJ) and figured that it would be quite a while before i was able to sew again.

the baby was born (and a sweet little baby she was!) and i had made her a charming little quilt, using repro fabrics from the 1930's. i had planned to also make a "matching" quilt for our bed, but that project got put on hold in the hustle of moving and caring for a growing family, all while doing a MAJOR remodel on our "new" home.

however, after we were here for a few months, i found that i really needed the soothing repetition of sewing, and creating something that stayed done, unlike cooking, cleaning, laundry or diapers. (not that i resent doing any of those things, it's just nice to have something stay done every once in a while!)


i hauled out my sewing machine again, and set it up on the school room table, right in the midst of the mess and bustle. every few days, i would piece a block (and that was in my "wonky" stage, apparently, since the blocks are purposely skewed. now, I'd do it a bit differently, as I'm not really sure that the wonky goes with the era...) until i finally had 154 4 patch, 44 log cabins and 39 Amish shadow blocks.


so, here we are, 4+ years later, and i have a substantial pile to work with! I'll do some playing with EQ5, and see what i can come up with. i envision perhaps a center medallion, surrounded by more of the blocks, and maybe a 4 patch border. maybe even some applique? *she says with a shudder*

this is a busy month (but aren't they all?) and we're busy planting and preparing to plant for our upcoming CSA season, but maybe i can at least get these blocks squared up and a plan for where I'm going!

check back here on March 31, and maybe you'll be pleasantly surprised. but not more surprised than i will be!
at 2:56 PM 3 comments:

lots of progress, despite the busy, busy month!

i never worked on the "official" UFO for this month, (i did get it out and look at it, if that counts?)

BTW: does anybody know where i can find a quilt pattern for a stained glass quilt? freinds and i would like to make one, and i haven't been able to find a pattern yet... thanks!


i had several other pressing quilting projects that i needed to work on, and i got quite a bit done, all things considered... 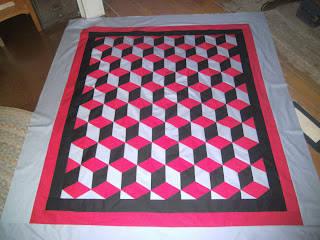 this is a quilt i pieced for a friend. she plans on hand quilting it, and it's a gift for her grandson. Leona is working through all her grandchildren, giving them a hand quilted quilt as a gift from her. after this grandson, there is only one grand daughter left. maybe then she'll start all over again? 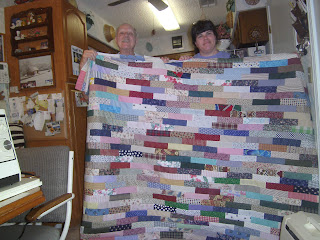 i pieced this top with my father-in-law when the girls and i went down to florida to visit a couple weeks ago. it's a take off on the jelly roll race quilt, but with bricks. the bricks are 2½" by 8", and there are 350 sewn end to end. let me just say that that was A LOT of bricks, and i don't plan on making one of these again any time soon!


this quilt was the 3rd charity top that i pieced this month, all for our church sewing group. (no pictures of the others, as that's really an on-going project that we work on twice a month during the winter.)

there is another quilt that i helped to piece, but it's still a secret, and i can't show it to you yet.

#8 was drawn for this month, and i have no idea where that one is! 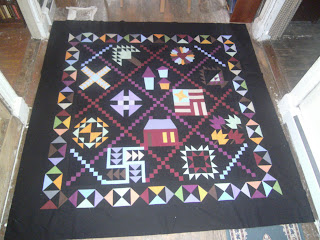 i started this Friendship Quilter's Calendar quilt last January. every month, our group has made another block, representative of that month. i completed my blocks using the 9 patch sashing, with hourglass borders, and another wide, plain border.

i plan to have it hand quilted, and would like to enter this one in our local county fair in July.


today was our monthly meeting of our group, Friendship quilters. 3 more calendar quilts were completed, and brought in. how exciting to see all the different possiblities from the same 12 blocks! (sorry for the terrible pictures! i'll try to get better ones somtime...) 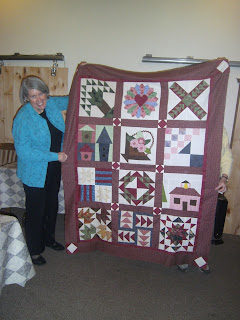 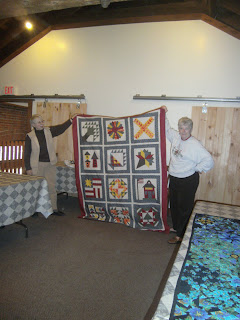 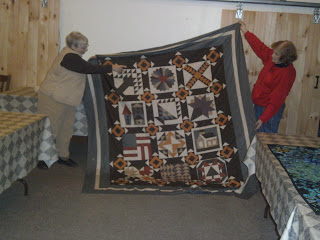