you need look no further than our driveway...

little did we know the priceless and precious gift that we were about to be given. 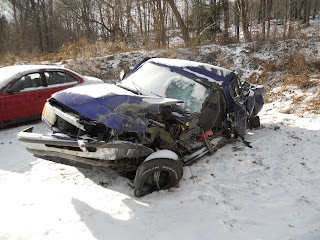 while traveling south to visit family, G, M and N were involved in a serious truck accident. 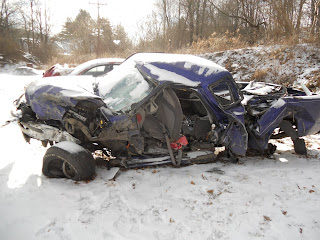 there were two water tankers traveling north. after failing to negotiate an "S" curve, G's truck slammed into the second water tanker. 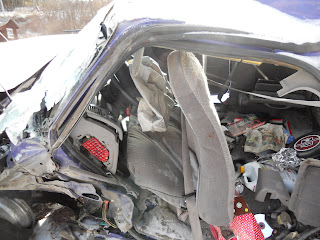 it was the quick thinking of those two drivers who quite literally saved the lives of my children: Miriam Elizabeth, Nathaniel Joseph and Gabriel Donald.


G would have hit that tanker head on, except for the fact that the first driver radioed back to the second that the purple pickup was loosing control. the second driver took his foot off the gas, and got all the way over to the right, against the guardrail. 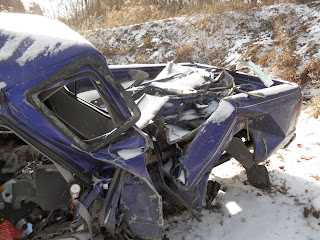 even still, the front axle of the (full) water tanker was broken, although the water tanker was rated for 28,000 pounds. the tanker driver sustained a broken wrist in his frantic effort to avoid hitting the pickup truck.

G was the most seriously injured of the 3, with a shattered pelvis and broken hip. he also had severe lung contusions, and was in the hospital for 5+ days, 1 of those in ICU. 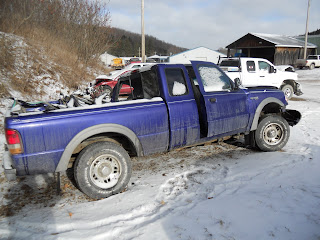 the kids left the house around 1PM. the accident was reported at 1:26. i received a call from the hospital at 2:37.
in those brief moments, while Dave and i were settling in for a quiet Christmas afternoon, God was watching over my children. 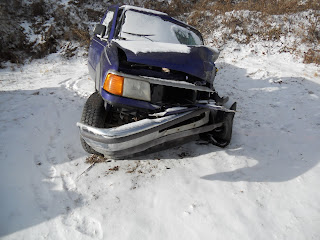 yet again, God has shown his abundant, unfathomable and unending mercies for my family.

i cannot even begin to imagine the horror and sorrow that we were spared from on Christmas day. 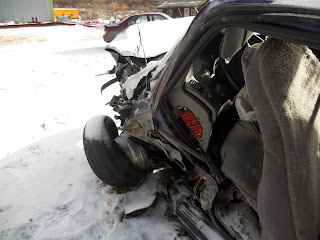 G has a second chance at life- the chance to seek and discern what it is that God has spared him for. surely God has plans for G- something that only my youngest son can do.

but most importantly- we have our 3 children- healthy and safe. and a visible reminder:

God is a God of inches.

and He loves us all.

you need look no further than our driveway to see that.

Email ThisBlogThis!Share to TwitterShare to FacebookShare to Pinterest
Labels: for my readers, God's grace and mercy, parenting

Amazing! God surely had his hands on the kids that day. It's a miracle they survived! G might not look at it as something good in the months ahead, but God has a plan for everything, doesn't he? That plan will be revealed each day.

I hope that you recieve this comment I have never left one on a blog sight :)) I believe you are a friend of a friend and I would just like to say that God's grace sometimes comes in various forms. I too am thankful for his sparing your children that day ! PTL ! But I also wanted to thank you for your comment of the 2 truckers. There are so many in the area that they are getting alot of bad publicity. Some of it is true, but some is just generalized. My husband is a trucker has been for 29 years. And it is just nice to see that some ppl recognize when there is a good trucker :) My husband has tried to help many ppl over his career...stranded mothers with flat tires, hitchhikers, campers, other truckers, ppl needing money...etc. All without recognition. So thank you and God Bless you & your family :))

wow. Brings tears to my eyes seeing this! How they ever came out of this is a true testamony of God's unending mercy!

Wow! I read the article in the paper, but I had no idea how serious his injuries were. The Lord was certainly watching over them that day!
I have tears in my eyes just reading this, I can't imagine what you have been going through as their mother, although I'm sure God provided the strength you needed.
Many prayers being sent up for quick healing.

how scary! so thankful for God's provision for you, that day and always. i hope all have a full recovery.

This brings tears to my eyes as I remember that day. So very grateful that their lives were saved.