ORANGE you THANKFUL for friends?

i wrote about my dilemma with my Growing Up Odd quilt a couple weeks ago. The blocks were all pieced, with the exception of one 49 patch. I asked for suggestions, as to what color block to piece, AND: 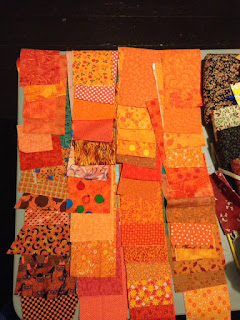 a never-before-met-quilty-friend, Dorthy, sent me a bag of orange scraps (more like orange hunks and small pieces, really!) 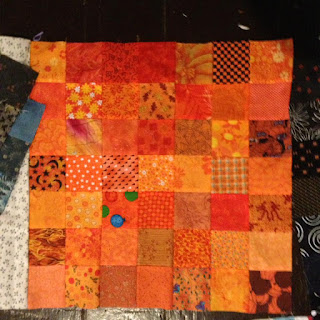 there were 50+ (!!!) pieces of orange in the surprise package i received the other day... enough to make the remaining 7X7 block for my Growing Up Odd quilt. 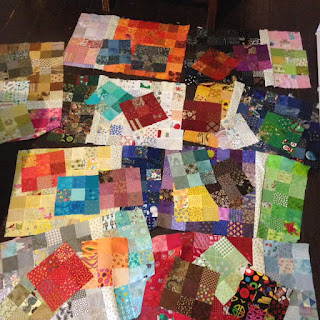 the infusion of fun, new and colorful fabrics has spurred me on to finish this top! i dug out some neutral from my drawer, did some simple math (since my squares are cut at 3"; different than the size in the tutorial) and got to sewing. hopefully i'll have a finished flimsy to show next week! 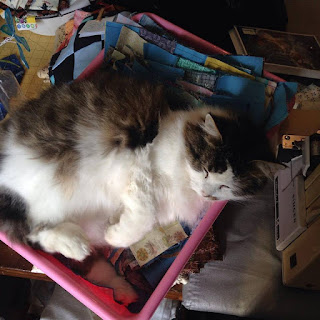 while my cat (Millie) naps in the sewing room, i've been busy making forward progress on this fun quilt. she's laying in the box of *another quilt that i've started*: the blue is kona cotton stratosphere, with a patchwork design with 1 of all the different 3" squares in my drawer. i think it's going to be obnoxiously big (the quilt, not Millie!) as there are far more squares in that drawer than i imagined! 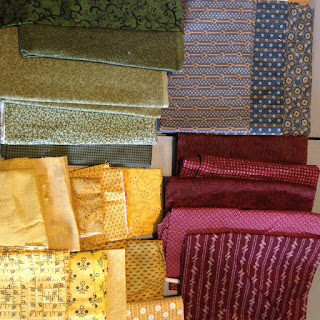 and just to keep things interesting- i'm along for the ride on Bonnie's mystery quilt this year- Good Fortune. i've done all the shopping from my stash (yay, me!) and have substituted the orange for cheddar yellow. i'm thrilled with my colors- especially love those blues! 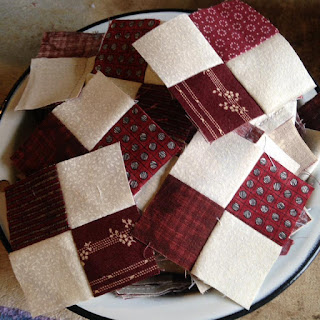 i've pieced all of clue #1- just need to do the spinning of the middle seam and then the pressing. this is my fourth Bonnie mystery. i love the colors, so i'm hoping i love the quilt, too!

( i was a bit disappointed in the MQ from 2014) but after all, it's just fabric, right? i know the completed quilt will be loved by someone, no matter what!

linking up to Angela at soscrappy and Bonnie at Quiltville. thanks for stopping!

Email ThisBlogThis!Share to TwitterShare to FacebookShare to Pinterest
Labels: growing up odd, RSC18, sewing with scraps

how odd is that- TWO POSTS IN ONE DAY!

I've been working on my Growing Up Odd quilt right along, and was making pretty good progress until i hit the wall... 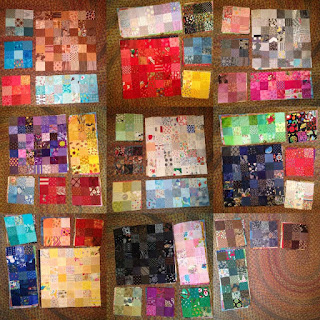 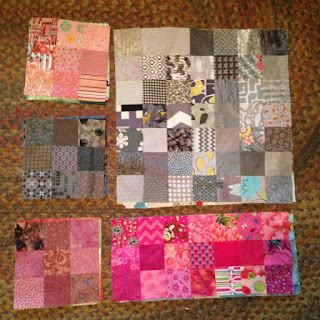 my squares are 3", and the quilt will have 9 blocks, making for a pretty large quilt.... 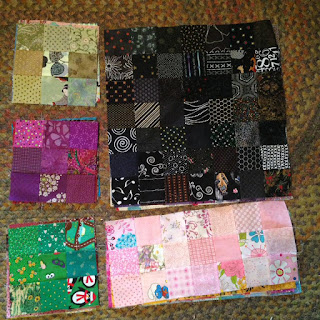 i was thinking of doing the sashing for in each of the blocks, and between the blocks in white/cream. 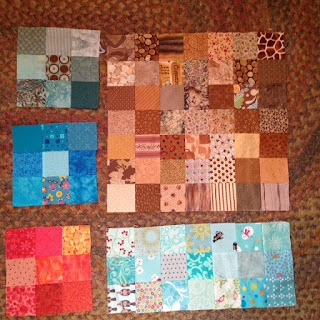 that may change, though... 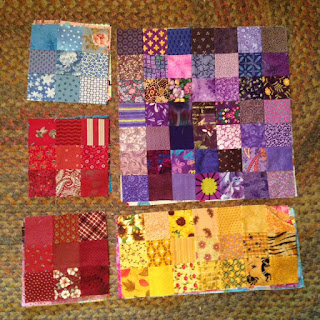 i do tend to get hung up (more than just a little bit, i'll admit!) on keeping my blocks monochromatic within themselves. 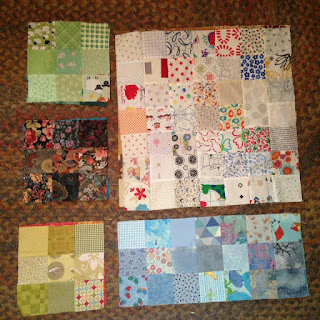 does that last sentence even make any sense?! 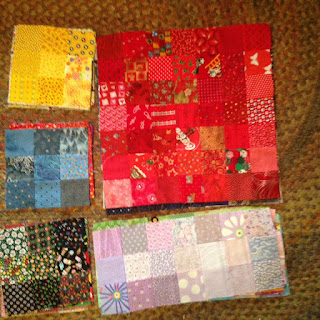 some colors i have LOTS AND LOTS of... (like blue, red and whites/creams) 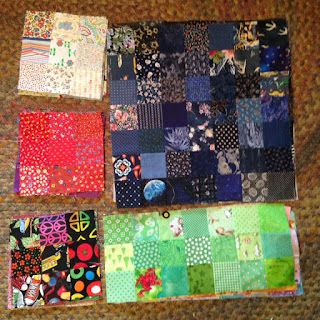 and then there are colors within my stash that are pretty poorly represented. 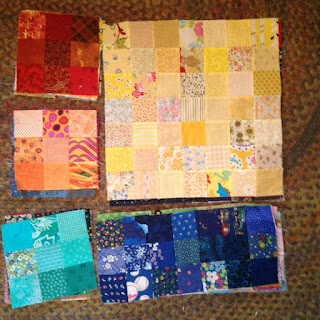 orange and brown come to mind... 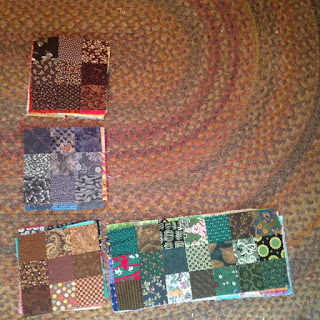 so: maybe you can help me? (pretty please?) i need one more 49 patch to finish out this RSC18 quilt, and i welcome suggestions! i do not have enough orange or chocolate brown to do the last big block, which would maybe seem to be the logical conclusion. a green block was suggested by a friend on facebook.

what say you, quilty friends? and be sure to click over and visit all the other RSC18 projects at Angie's blog- it's the end of the year, and the fantastic finishes are really starting to roll in!
at 4:02 PM 6 comments:

grab a cup of coffee, and settle in...

it's been awhile- and there's lots to catch up on! get your coffee, and settle in- we might be a while! 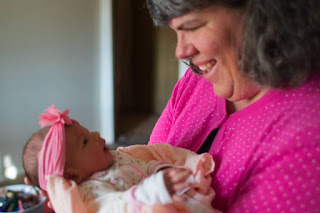 the biggest news: i'm a grandma again! sweet little LL (named after me! imagine that...) joined our family a few weeks ago. she's the sweetest little thing ever, and evens up the score: grandsons- 2. granddaughters: 2. 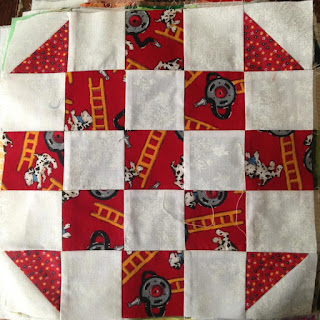 i don't think life was any more particularly busy than normal, but I've not had as much time in the sewing room. (not complaining, just explaining, as my MIL would say...) 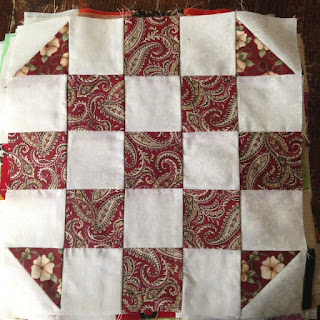 my red SquaredAwayBOM blocks have been done for awhile (on time, even!) but i just realized that i had forgotten to post or blog about them.. 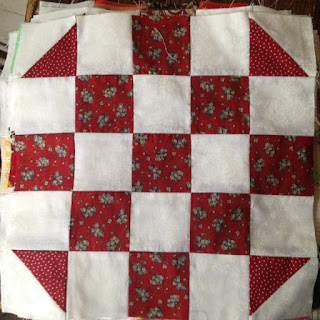 you might recognize my black blocks as the GREEN October blocks. my March SABOM blocks were a mix of light and dark greens, so i decided to do these blocks black instead of green, rounding out the colors a bit in my quilt. 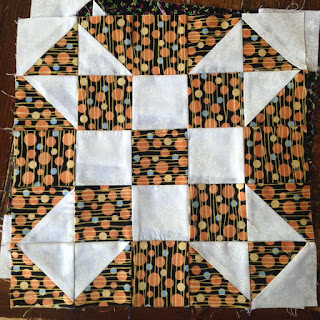 (you can see my green blocks here. i guess i never blogged about them alone; they just got clumped in with some other blocks...) 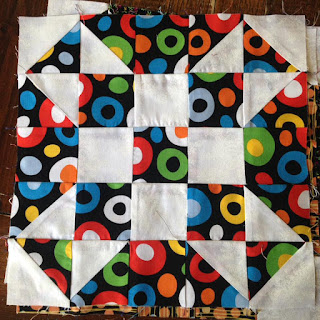 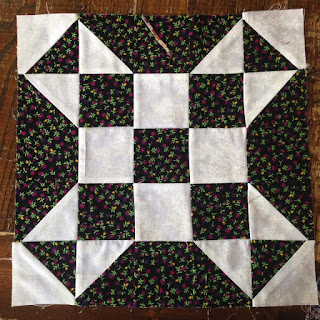 i was a good little quilter, and followed the rules for September's blocks. (never mind that they just got finished this Saturday morning in November!) ha. 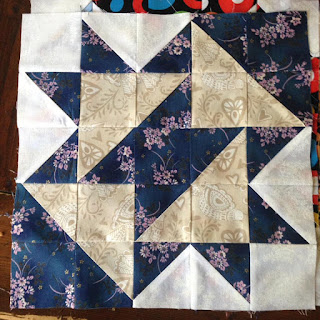 i didn't think i really liked these blocks, but neither did i have the energy to come up with an alternate design for dark blue.

however- after piecing them, they've grown on me, and i do like them now. 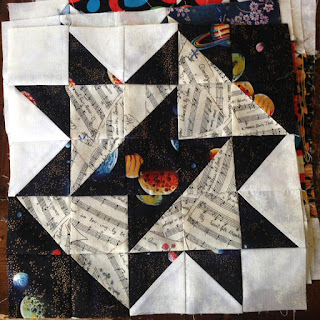 this gives me 29 SquaredAway blocks to play with. i did enjoy piecing them, and using some more of my 3" squares (which do finally seem to be dwindling). i actually don't have any specific plans for these blocks, but i am considering sending them to a friend who had wanted to do the SA quilt, but for health reasons wasn't able to keep up. seems like a win/win- i had the fun of participating, and using up some of my fabric, and she'll have the fun of designing and finishing a quilt. i'll let you know how that works out...

linking up to SoScrappy- and come back again soon, as i plan on catching up with some of my other RSC18 projects- like my BoHo 9 patch, and the Growing Up Odd quilt, too!